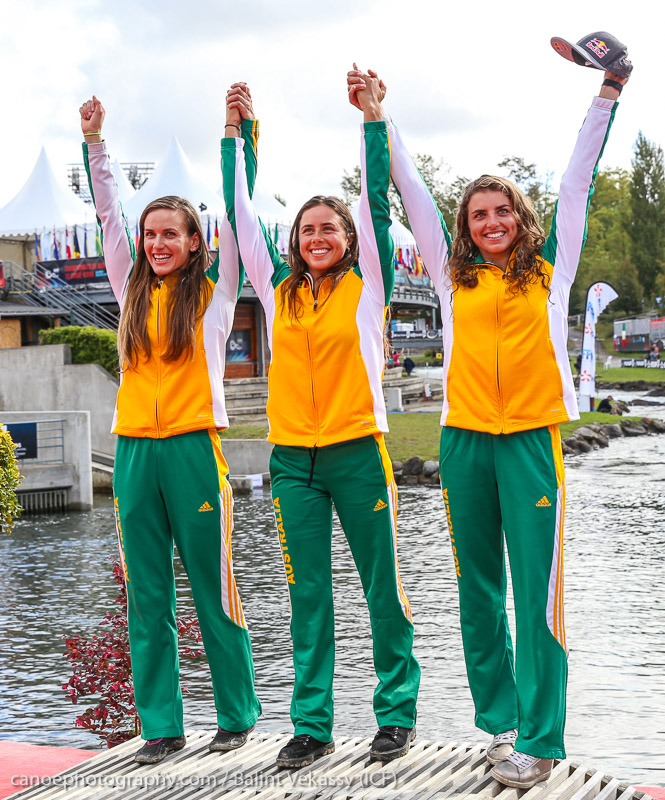 Australia has won a silver and a bronze medal on the opening day of the 2017 ICF Wildwater and Canoe Slalom World Championships in Pau, France.

Two-time Olympic medallist Jessica Fox teamed up with younger sister Noemie and the experienced Ros Lawrence to win silver in the C1 teams event, which followed a bronze medal earlier in the program for Jess Fox, Lawrence and Tasmania’s Kate Eckhardt in the K1 teams.

Noemie Fox said the team rallied well after a small mistake in the K1.

“It was a good run, I had a bit of a mistake in the Kraken, but we held it together and we were clean, which was very important,” Noemie Fox said.

“It was just so much fun to be out there today. The course was a bit open, so it was nice to have a run where you can feel the flow and focus on the team and the weaving, so it was good.”

Jessica Fox said waiting for the final result in the K1 event was nerve-wracking, as Australia was one of the first teams on the course.

“It was a pretty good run, I think we made an error here or there in the middle section, and we had a touch, but it was our first time racing together in a while so we really had a great time,” Fox said.

“We weren’t sure we’d get a medal because there were a few people behind us, but we were able to hold on.

“It’s a nice way to get the team together, to work together and have fun and enjoy it.

“It starts off well for us with two medals, so looking forward to the rest of the week.”

Lawrence has the busiest program of all the Australian athletes, competing in both team events on the opening day, along with individual K1 and C1 events and the extreme slalom events on the final day of the program.

“Yeah it’s a heavy program with a lot of racing, but I guess you’ve got to be in it to win it,” she said.

“The World Cup schedule is a bit tight to be doing boater cross (extreme slalom) all the time, so it’s a bit more spread out at Worlds so I’m looking forward to doing that on the last day.”

In other results on the opening day, the men’s C1 team of Daniel Watkins, Ian Borrows and Tristan Carter finished seventh, while the men’s K1 team of Lucien Delfour, Jaxon Merritt and Warwick Draper finished 17th.