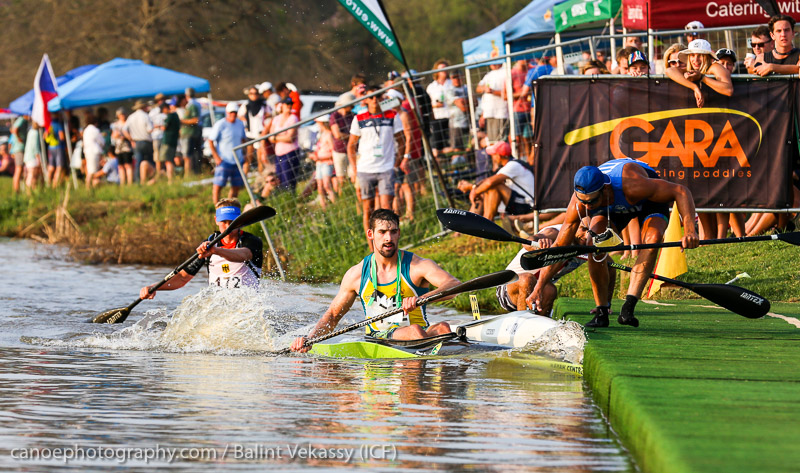 A top ten finish from Josh Kippin was the highlight on a gripping day of competition for the Australian athletes at the 2017 ICF Canoe Marathon World Championships in Pietermaritzburg, South Africa.

Kippin bounced back from a disappointing result at last year’s World Championships to finish ninth in a hotly contested men’s K1 final at Camps Drift.

“I had a pretty bad result last year with a 20th, so I was pretty disappointed with that,” the Western Australian said.

“So I just went back to the drawing board and re-jigged my training. My goal was top 10, I finished ninth so mission accomplished and it’s a stepping stone from here.

“You don’t get much respect when no-one knows you, but after you win a couple of sprints, I don’t know if it puts a bit of a target on your back,” he said.

“Down in Australia you are isolated from the European racing, we don’t get much chance to race at this level at all, so it’s a slow progression, but I’m learning fast.”

“It was pretty tough in those conditions, really hot,” she said.

“Overall I think it was a really strong race, considering I had a year off last year.”

Teammate Kate Leverett fell out in the opening stages of the race and had to withdraw.

Reka Abraham made history for Australia, competing in the women’s C1 and finishing sixth.

“I knew I probably couldn’t keep up with the girls at the start, they are all sprinters and I just started in November,” Abraham said.

“So it’s still a lot of work for me for the future. In Victoria I am the only female canoeist, so I’m used to paddling on my own.

“Definitely my goal is to qualify for Tokyo 2020 with the girls, so I think it’s a good learning curve for me to start with the longer distances and get a bit of endurance in for the sprints.”

In the men’s C1 Rain Metsoja followed up his medal-winning performance in the Masters earlier in the week with a 10th in Saturday’s final.

Sunday will see Australians competing in the K2 classes.