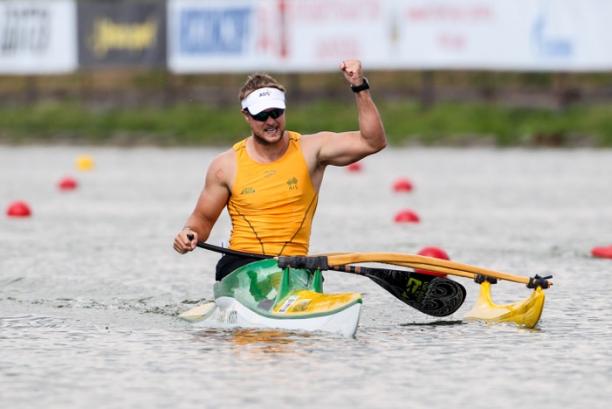 The date August 23, 2012, will never be forgotten by Australian paracanoeist Curtis McGrath.

That was the day the young soldier’s life changed forever; the day he stepped on a homemade landmine in Afghanistan and had both his legs blown off.

Next week, exactly five years to the day, 29-year-old McGrath will head out onto the water in Racice in the Czech Republic a Paralympic and World Champion. He’ll be part of a strong Australian team looking to build on their strong performance in Rio last year.

It’s been an incredible journey for McGrath, and for someone still relatively new to the sport, the best is maybe yet to come.

The McGrath story is legendary. How he told fellow soldiers frantically carrying him to a medivac helicopter in a Taliban-infested area of Afghanistan that they would one day see him competing at the Paralympics.

At the time such bold predictions could be put down to post traumatic shock, the delusions of a fit young man struggling to come to terms with an horrific experience that had turned his life upside down.

You can guarantee when McGrath held his hands aloft after crossing the Rio finish line last year, the sport’s first ever KL2 Paralympic gold medallist, it was those same soldiers who carried McGrath to the helicopter in 2012 who were cheering the loudest.

McGrath is always looking for fresh challenges. He loves the Invictus Games, an annual sporting event for wounded, injured or sick armed services personnel, of which he is an Ambassador for the 2018 Games in Sydney.

And after creating history in Rio, he toyed with the idea of adding a second sport, rowing, to his repertoire for Tokyo. It was incredibly ambitious, as it turns out too ambitious even for a high achiever like McGrath.

“Rowing for me was a great experience,” McGrath said.

“My priority will be Paracanoe and if I can manage my time better and I see myself wanting to go backwards for two kilometres I may try again.

“The change to 2km for Para-Rowing makes it a lot hard to train for both. They require two very different systems of physicality and me being a 200m kayaker makes it very hard.

If Curtis McGrath tells you it was hard to get back into training post his triumphant Rio Paralympics campaign, you can safely assume it was incredibly difficult.

It may be the first time he’s ever uttered the word publicly. There is little doubt that life as a Paralympic gold medallist has thrown up lots of new challenges he could never have dreamed five years and one day ago would be part of his life.

“Life post Rio has been really busy, but I have tried to keep it balanced with training and other engagements,” he said.

“It’s been tricky, but I think I have prepared well for Worlds this year.

“I had a lot of requests for speaking and invitations to events which have been great but it has taken me away from training.

“It was hard to get back into training. The body was enjoying not waking up sore and tired, to only do it all again the next morning. I think I am lucky I get the opportunity to compete in a sport I enjoy, that does make it easier.”

At the back of McGrath’s mind must be the nagging question – how do you top the Rio experience? It was the first time para canoe was on the Paralympic program, McGrath was a gold medallist, and there were more honours to come.

“I think my best memory from Rio was the opportunity to carry the Australian flag at the closing ceremony,” he said.

“Being my first Games I did not for one second think it was going to be me they would choose. There are so many amazing moments that happened in our team, so I felt very honoured to be chosen.

“Also, I cannot forget having my amazing cheer squad at the course, they made the atmosphere so good and lively. They really got into the Brazilian vibe of Rio.”

McGrath is looking forward to continuing his rivalry with Austria’s Markus Swoboda in Racice. In McGrath’s early days of racing he saw a lot of Swoboda’s back. That finally changed just before the Olympics and then, of course, at the Games themselves.

“Racice will be an interesting regatta, I’ve never been at a world’s in a post-Olympic year,” McGrath said.

“So, I expect some upsets. I hope that I can continue to be ahead of my competitors but I know everyone has been working really hard.

“Markus Swoboda has shown he still has great speed and I believe he will be the one to watch in Racice. I almost feel as though I have a target on my back now.”

Once next week’s World Championships are over McGrath will head to Canada for the 2017 Invictus Games. At the inaugural event in London he competed in archery and swimming, and then last year turned his hand to rowing and swimming.

Not surprisingly, he turned out to be pretty useful at all of them. This year he’ll add wheelchair rugby to his bulging portfolio.

“Being a part of the Invictus Games has, is, and will be amazing,” he said.

“I am excited to be a part of the team heading over to Toronto next month. Invictus is not all about winning, it plays a more important role in showing that sport can play a vital part of recovery for all types of injuries and illnesses.

“To know and see what the competitors at the Invictus Games have been through, and yet be out there competing and having fun while doing it is awe inspiring.

“Next year when the Games come to Sydney, it showcases this to every Australian, both able, injured, ill or disabled. It will be the event of the year.”

The 2017 ICF Paracanoe World Championships begin in Racice on Wednesday.