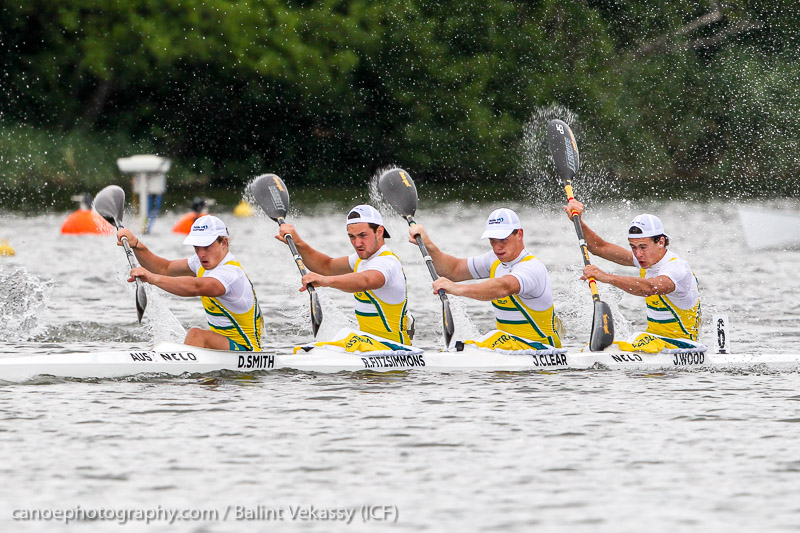 The Australian men’s K4 team and Rio Olympian Alyssa Bull have booked themselves places in finals this weekend at the ICF U23 and Junior Canoe Sprint World Championships in Pitesti, Romania.

The U23 K4 500 crew of Jayden Ellis, Bill Bain, Riley Fitzsimmons and Simon McTavish cruised into their A final as fourth fastest, looking well in control in finishing second behind Canada in their semi-fina.

Bull had already booked herself a place in the K1 1000 final after winning her heat on Thursday, and added the K1 500 final to her weekend workload on Friday, qualifying fifth fastest in a world-class field headed by European U23 champion, Hermien Peters.

“I’m feeling alright, I haven’t tapered a lot for this event,” Bull said on Friday.

“I’ve had one afternoon off. I’ve been doing lots of long stuff lately and not so much of the fast stuff, trying to peak for the senior Worlds.

“I just take every race one-by-one, and make sure I do the best race plan I can. I make sure the other girls don’t spook me, and at the end of the day if I make all my A finals I’ll be pretty happy.”

It was a busy day for Australian paddlers, with more than 15 boats in action across both junior and U23 divisions.

Among the athletes heading for semi-final action this weekend are Monique Carbone in the junior women’s K1 200, Ethan Neville in the K1 junior men’s 200, Shannon Reynolds in the U23 women’s 200, and Jared Lee in the K1 U23 200.

The 2017 ICF U23 and Junior Canoe Sprint World Championships continues on Saturday from Pitesti.