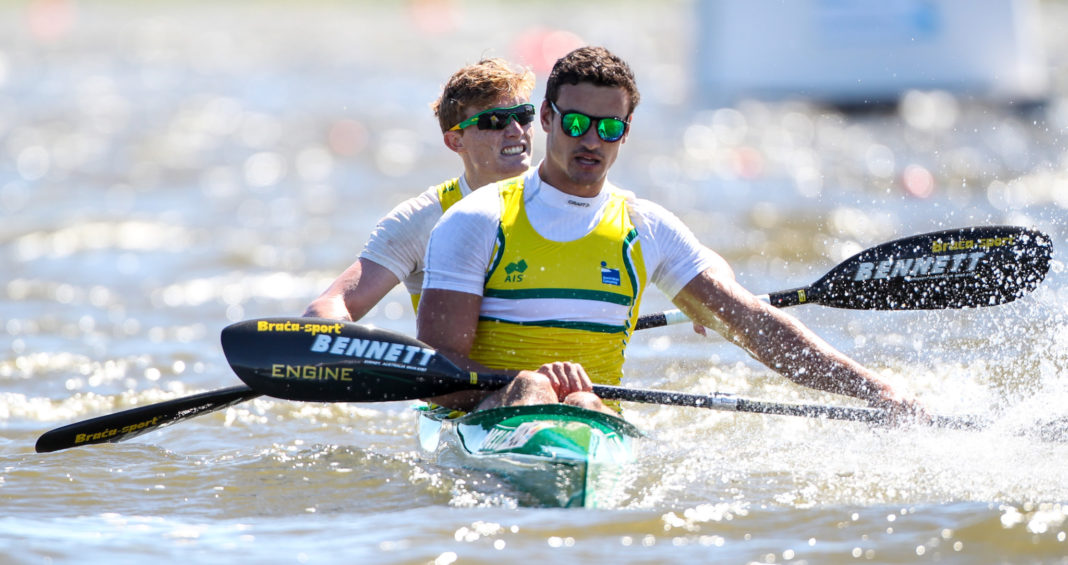 Riley Fitzsimmons and Jordan Wood will be out to try and re-claim the U23 K2 1000 title they won in 2015 when they compete in the ICF U23 and Junior Canoe Sprint World Championships starting in Pitesti, Romania, on Thursday.

Fitzsimmons and Wood missed last year’s U23 World Championships to focus on their Olympic preparations, but are part of a 27-strong squad competing this week in Europe.

“We didn’t race last year so technically we are not the defending champions,” Wood said.

“But the last time we did race in this event, in Montemor, we won the gold so we’re hoping to do it again.

“We’ve been going really well in training and hitting good markers, so we just want to showcase what we can do.”

Fitzsimmons said he and Wood were very different paddlers to the pair who won their first World title in Montemor in 2015.

“I guess we’re feeling pretty confident coming into this regatta, we’ve had a of big races behind us,” he said.

“We’re two different paddlers this time than two years ago. We’re a bit more mature about the way we go about this.

“Personally I’m pretty relaxed, and I’m sure Woody is pretty relaxed leading into this. We’re not as nervous as we were two years ago.

“But we had a look at the start list last night, and it’s still a quality field so anything can happen.”

The Australian team has left nothing to chance in their preparations, using the world-class bases they have on Australia’s Gold Coast and in Hungary to get themselves ready.

“We did a large camp on the Gold Coast before we came over about three weeks ago, and we went straight into Hungary and did a week’s training there,” Fitzsimmons said.

“Woody and I have been in the K2 a couple of times last week, and really nailed our training sessions and did what we wanted to do.”

Also in the Australia squad is 2016 Rio Olympian, Alyssa Bull, fresh from a strong 2017 World Cups campaign that saw her pick up a gold and a silver medal in distance events, and Bill Bain who put in some strong performances against the world’s best in Szeged and Belgrade.

Australia will have a squad of 12 juniors competing, showcasing the future of sprint canoeing for the national team.