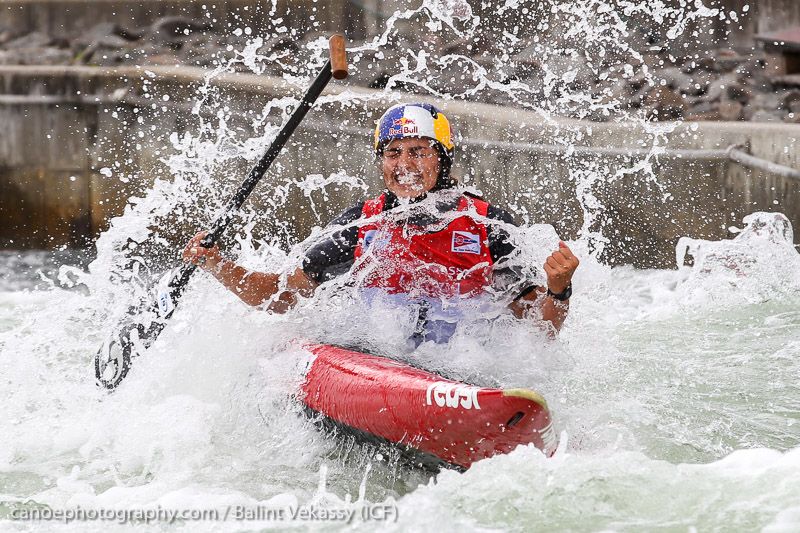 In her long canoe slalom career Jessica Fox has recorded many memorable gold medal performances, but few have been as emphatic as her win in the women’s C1 at the third ICF World Cup in Markkleeberg, Germany, overnight.

“I was aggressive from start to finish, and I got those stopper moves going like I had visualised in my head, so it’s such a nice feeling when a run comes together like that,” Fox said.

Organisers made the decision to remove two of the gates from the women’s C1 run, primarily to fit in with tv schedule and to make for smoother finals.

“It’s like we are going back 40 years to when they tried to do this for the K1 women,” Fox said.

“Two weeks ago we got accepted into the Olympic program, and now we can’t do the full course because they don’t think we are capable of it.

“I know that all the girls in that final are capable of doing that course. Maybe we have to do a few more spins, but give it time.

“We’re a new category, everyone else has been here since 1949, and we’ve been here since 2010. The girls are improving, I hope this is not going to be a trend for future World Cups. I’d like to see the girls do the same course as the boys.”

Lawrence scraped into the C1 gold medal race in the last qualifying position, but put down a solid run as the first athlete to go in the final and then watched on as all but two of the athletes fell behind her.

“I’m really happy, there were a couple of little places where I lost time, but I’m improving and it will go better next time,” Lawrence said.

“I got a jolt last weekend when I wasn’t in the final at all, so I’m really happy to now be in the final and in the medal standings.”

Noemie Fox picked up six seconds of penalties to finish eight in the final.

In the men’s K1, two gate touches proved costly for Lucien Delfour, who had to settle for fifth place in a time of 99.65.

The race was won by Italy’s Giovanni De Gennaro in 92.83, with Germany’s Sebastian Schubert second in 95.78.

The third ICF Canoe Slalom World Cup will conclude in Markkleeberg on Sunday.