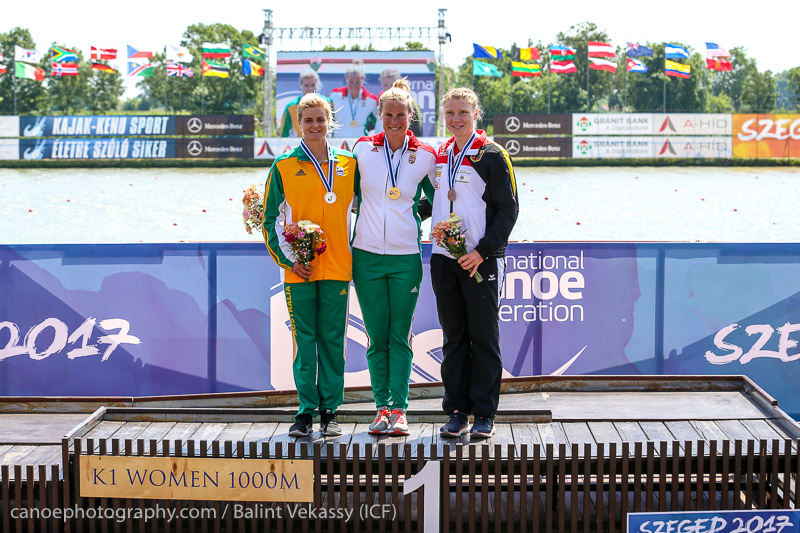 Australian sprint canoeist Alyssa Bull has won a silver medal in the K1 1000 at her first ICF World Cup event of the European season in Szeged, Hungary.

She continued her good form later in the day by teaming up with Rio partner Alyce Burnett to qualify for Sunday’s K2 500 final.

21-year-old Bull and Hungarian Dora Bodonyi cleared out from the field in the 1000 final, with a big home crowd urging the local hope to the finish line.

“I had a race plan, I stuck with it, but I didn’t quite have enough at the end,” Bull said.

“I was just trying to hang on, I really wanted to get a good start and make that first 250 count. I didn’t expect anything today, so I’m really happy.

“That was really hard. But I’m really stoked how that went.”

Bull, who made her Olympic debut with Burnett in the K2 500 last year, said despite her success today she will continue to focus on the team boat.

“I’m really glad I get to get some K1 experience internationally,” she said.

“Unfortunately it’s not an Olympic sport, but sometimes that’s the best way to start.”

Bull and Burnett made the final of the K2 500 in Rio last year, and will get the chance to test their progress since the Games on Sunday.

They both go into the race with excellent individual form, Burnett winning her K1 500 B final just minutes before Bull won her 1000 A final on Saturday morning.

“Last year our main aim was just to make the A final, this year we are not settling with close, we want to be at the top end of an A final.

“I think we are definitely capable of that. We have both had good K1 results here, so we can use that to push ourselves tomorrow.”

Queensland’s Billy Bain will also race for a medal on Sunday after qualifying for the final of the K1 500.

Jo Brigden-Jones will contest the B final of the K1 200, while Matt Goble sizzled in his semi of the K1 200 to also qualify for Sunday’s B final.